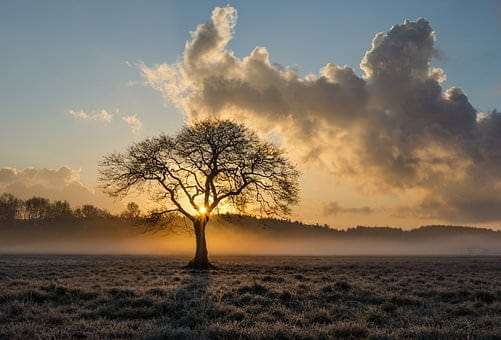 The most common way to identify trees is by looking at their leaves. We do it without even realizing it, after all, it’s hard to miss the tree’s beautiful green coverage and changing colours into autumn. But how do we identify deciduous trees once their leaves have dropped? Let’s look at how to identify trees in winter, focusing on 10 trees found here in the UK.

The common Ash grows throughout the UK and is mainly found in deciduous woodland and established hedgerows. When left untouched a fully grown Ash will reach between 35-40m in height.

Ash leaves fall early in autumn and develop late in spring allowing extra light through to the forest floor which enables other plant species to thrive around them, therefore, providing great habitats for a mixture of wildlife.

Ash has distinctive black buds and upturned grey shoots of new growth, making these great identification features. As you look at each twig you will see a black bud at the end as well as buds growing in opposing pairs. The buds are hairless and have a black shine to them.

Looking at the tree’s bark is also another great way to identify trees in winter, as on closer inspection each species bark does vary more then you might first imagine. The bark of a younger Ash is relatively smooth, yet as the tree matures it develops distinct ridges in a diamond-shaped pattern. Its bark is pale brown-grey in colour darkening with maturity.

Oaks are long-lived trees, often reaching 500 years in age. The English Oak is widely regarded as part of our heritage and is a much loved tree here in the UK. This native tree supports more wildlife species than any other native tree so is essential to support biodiversity.

An Oak can reach between 30-40m tall, then after reaching its maximum height it actually then shortens a little to increase its lifespan, it is one of the few trees known to do this. 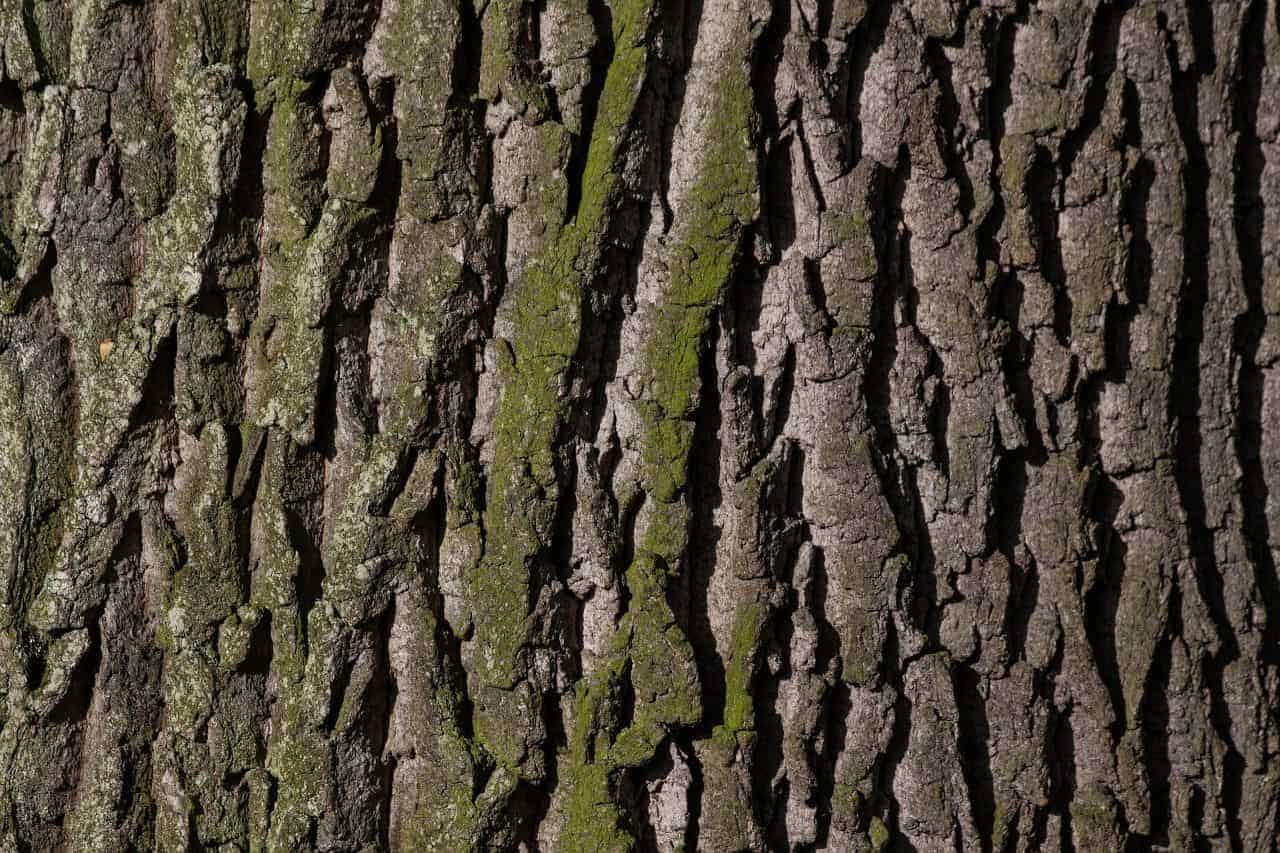 When identifying an Oak in winter look for the rounded buds, they have a series of overlapping bud scales and can be either smooth or slightly hairy at the tip, these bud scales protect the buds during the winter months. The buds are sharply pointed and clustered at the end of each twig, these are known as the terminal buds.

The bark of the younger oak tree is smoother and grey with a hint of green, but as the tree ages the bark darkens and develops deeper furrows often in hexagonal and rectangular patterns.

The Silver Birch is a distinctive deciduous tree. Deemed to be a medium size tree, the Silver Birch can reach 30m in height at full maturity, forming a light canopy with its drooping branches. These are said to be pioneer trees, meaning they are usually one of the first trees to colonize newly cleared land.

When identifying trees in winter, the bark is a great identication tool, especially in the distinctive Silver Birch. The bark of a Sliver Birch is a distinctive white-silver colour, hence its name, and sheds in paper-like tissue layers. At the base of the tree the bark is darker and more rugged in texture with deepening fissures as the tree ages. Even through the winter months the bark remains light silver in colour so it is a useful identification feature all year round.

At maturity a common beech tree can reach up to 40m in height with a wide spreading domed shaped canopy. Beech trees can be found amongst woodland or growing as an individual stand alone tree next to a country road. Beech prefer drier well drained soil such as chalk and limestone.

To help you identify Beech during winter take a careful look at the bark, it is smooth and grey-brown in colour on younger trees, then as the tree ages horizontal etchings appear on the bark that then deepen as the tree matures.

Through the winter months the beech tree, as with some species of oak trees, actually retains some of their dead leaves. It is thought that this happens to protect the buds and new growth as passing herbivores find the dead leaves unpalatable so leave the tree alone. 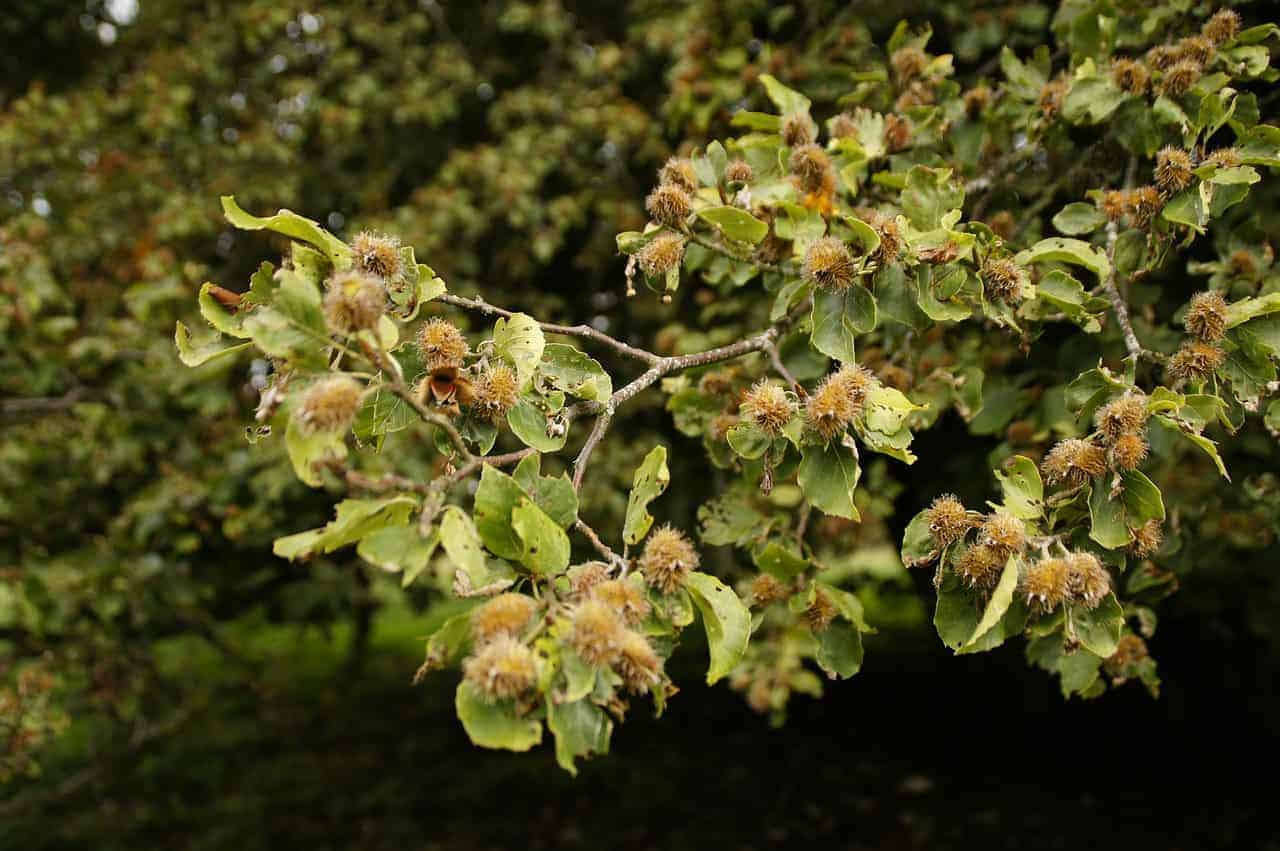 Beech buds are a distinctive sharp pointed shape, usually 1-2cm in length. They grow at even intervals on alternative sides of the twigs and through winter remain coppery-brown color before turning green in spring.

Another way to help with identifying the beech is to look around the base of the tree, during autumn they provide an abundance of beech nuts that are contained in distinctive casings. They are green when they fall but in the winter these casing will be brown, spiky, slightly triangular in shape and probably empty as they are a firm favourite with the local wildlife and great for foraging too.

The Hazel is an important understory tree, providing nuts for wildlife and supporting many forms of lichen. Left un-coppiced Hazel can grow to 12m and last for 80 years, but when coppiced Hazel is said to last for several hundred years.

During autumn and winter the hazel will have male and female flowers on the same shrub. The male is a long yellow catkin like flower, while the female is much smaller and red in colour. The flowers open in early January before any new growth or shoots appear. The Hazel flowers are wind pollinated with the pollen being blown from the male to the female flowers which then develop into a hazelnut later in the year. 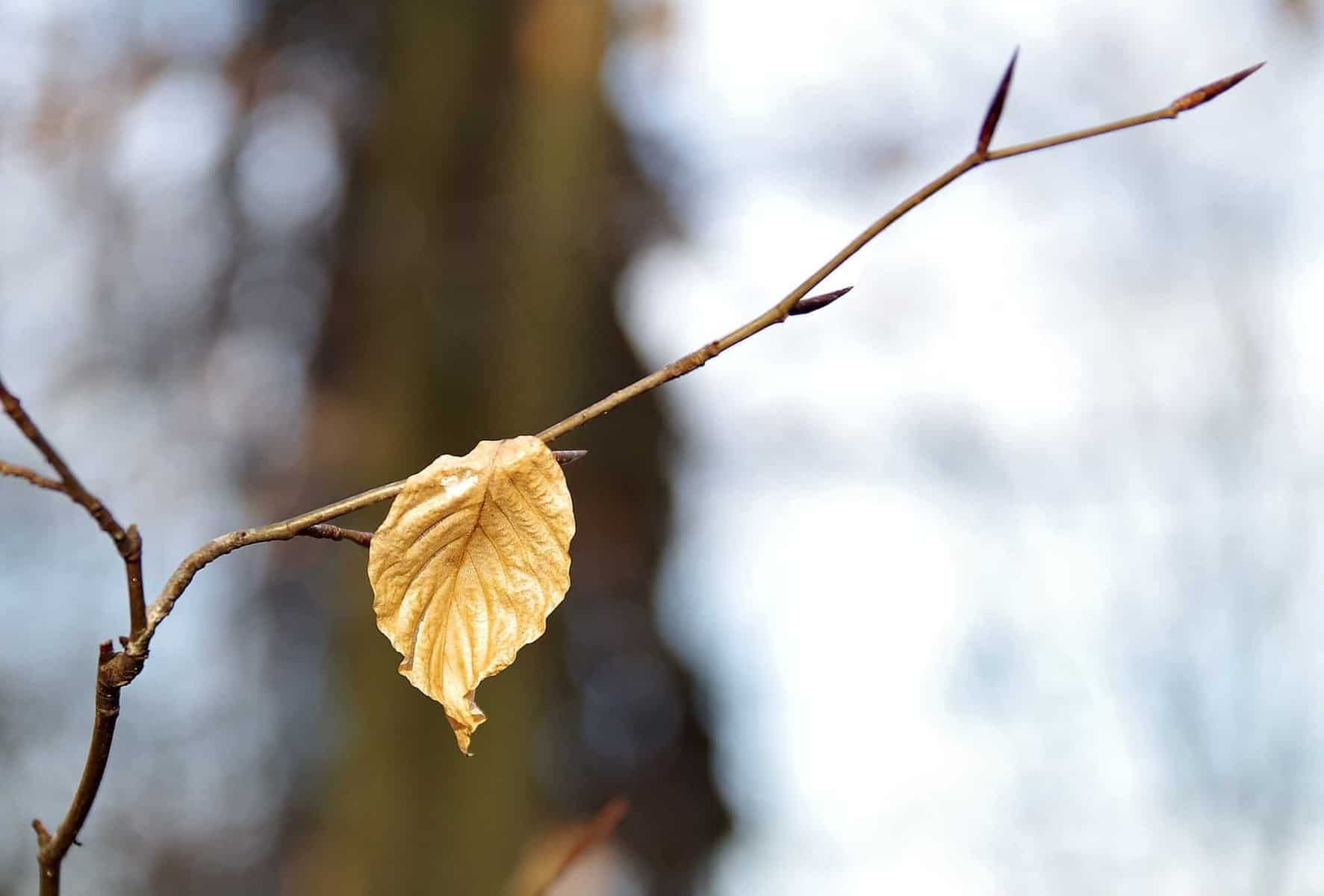 Another distinguishing feature of the Hazel is its bark. The Hazel’s bark is smooth and light brown in colour with vibrant yellow pores, these become more distinctive as the tree ages.

The Sweet Chestnut is a deciduous tree which can reach up to 35m in height at full maturity. They are from the same family as the Oak and Beech trees and can live up to an amazing 700 Years.

Sweet Chestnut is said to be one of the easiest trees to identify with its distinctive bark, buds and shoots, and even more distinctive and iconic nuts in autumn.

Its bark is a grey-purple that becomes darker as the tree ages. As the tree matures the bark fissures deepen and appear to spiral the tree vertically making a distinctive pattern. The twigs are a deeper brown-purple colour with the buds being oval in shape and a deeper plum colour.

Another aid for identification would be to look under the Sweet Chestnut tree for the remains of the nuts themselves or for the distinctive nut casings. When the nuts first fall they are spherical, have a lot of small slender spikes and a vibrant green. Though not to be mistaken with the Horse Chestnut’s conkers (which are definitely NOT edible) and have fewer but larger spikes.

Some Chestnuts may remain amongst the casings but these are a very popular nut to forage and are even more popular with the local wildlife. 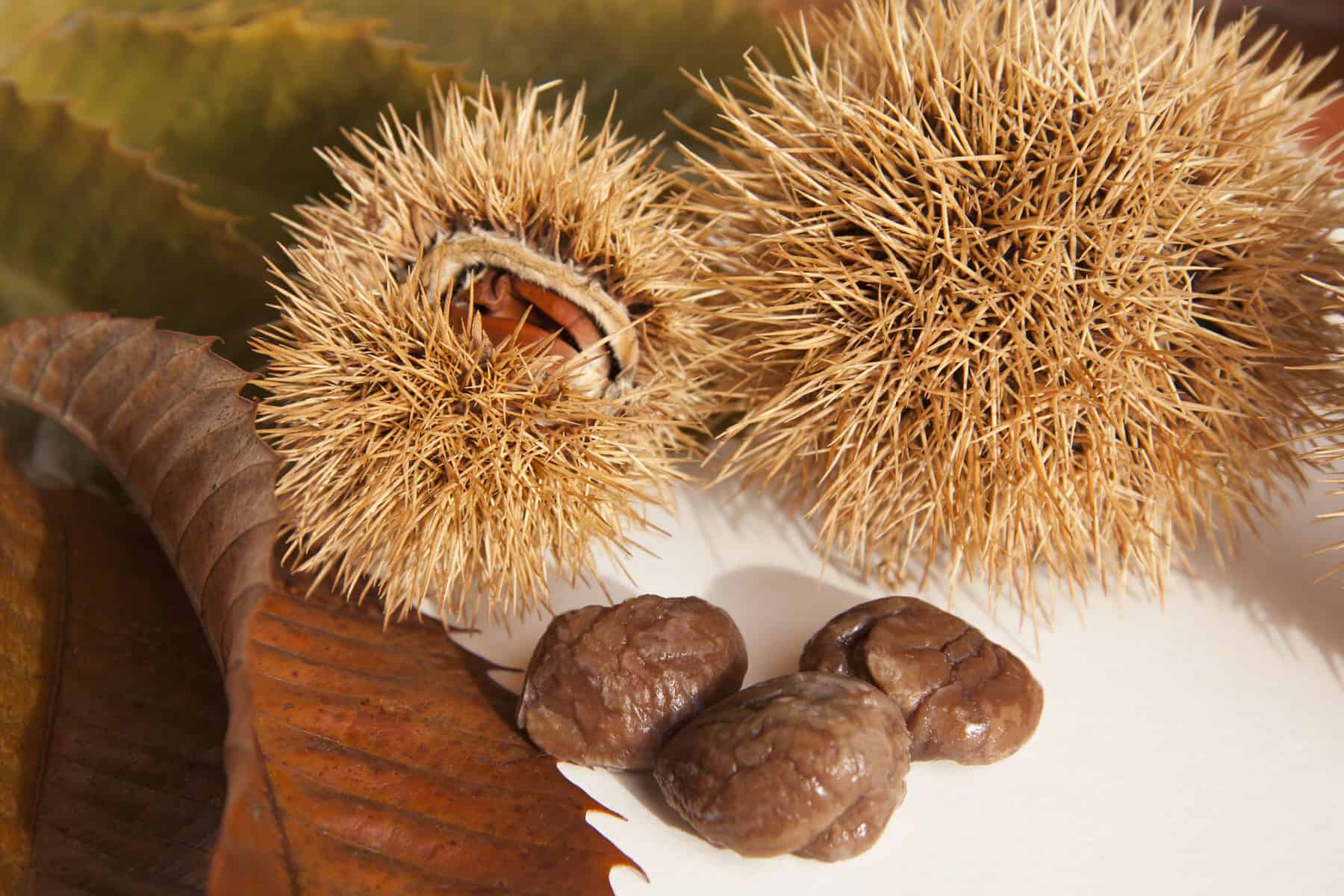 The broadleaf sycamore can grow up to 35m in height and live for up to 400 years. It provides an ideal habitat and food source for a variety of wildlife, especially aphids. The sycamore is thought to have been introduced to the UK by the Romans and is now established as a common sight in the UK. These trees can thrive on a range of sites and soil types but grow in similar locations to the Ash though they are a little more hardy to frost.

When identifying trees in winter, take a look at the Sycamore’s bark, it is a distinctive pink-grey colour and smooth on the younger tree. As the tree ages the bark becomes darker and cracked producing peeling layers that shed. 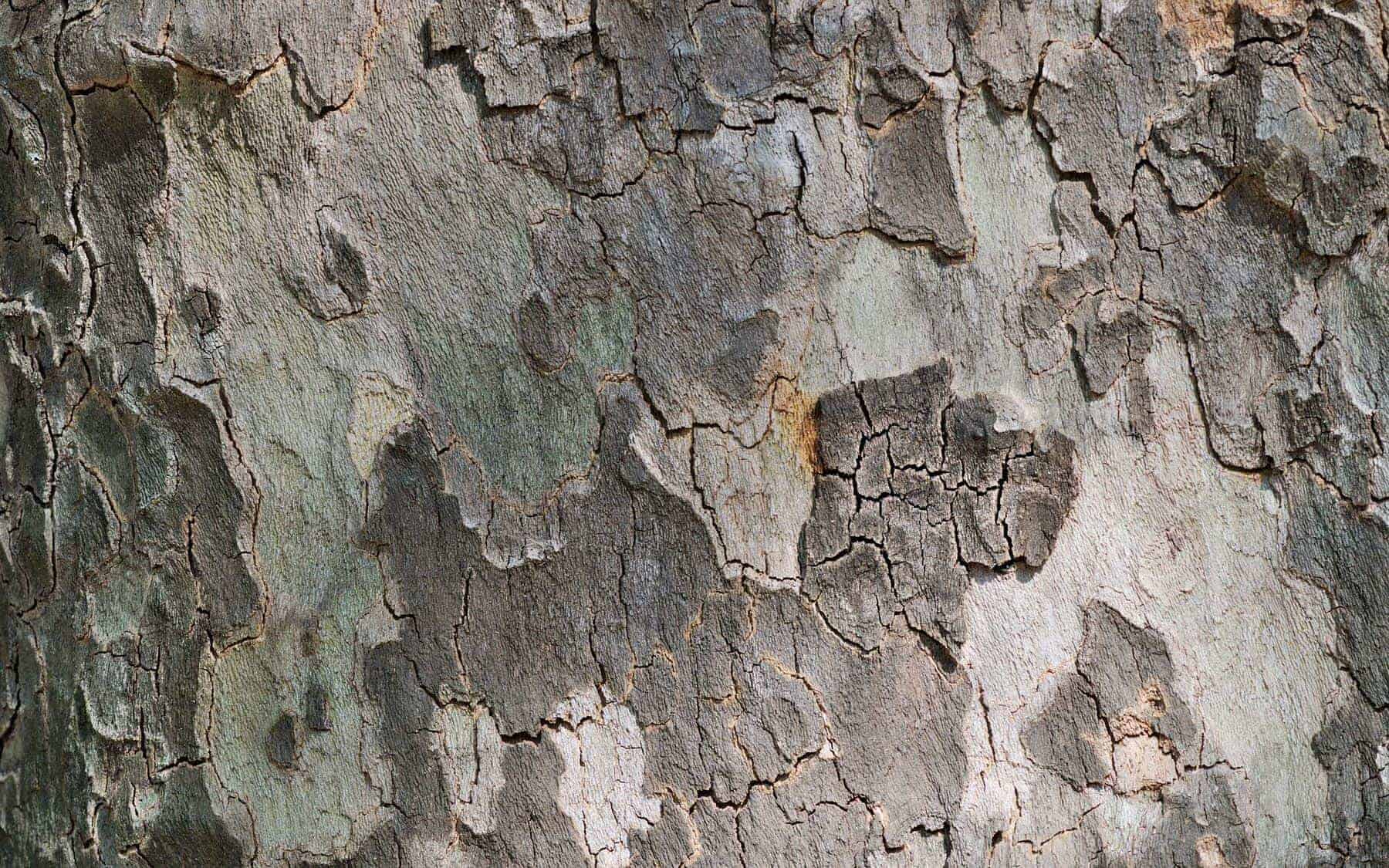 The tree’s buds are egg shaped and green in colour, growing to 0.5-1cm in size. The buds on the Sycamore grow opposite each other in opposing pairs.

The Crack Willow is one of the larger species of Willow, but a relatively smaller deciduous tree compared to other native species reaching just 20m at maturity. It has a short thick trunk and develops a rounded crown canopy.

This Willow is often described as scruffy and loud due to its ability to split and crack on a regular basis. The Crack Willow gets its name from the loud cracking sound it makes as its branches break, it is a distinctive and louder noise compared to other trees. 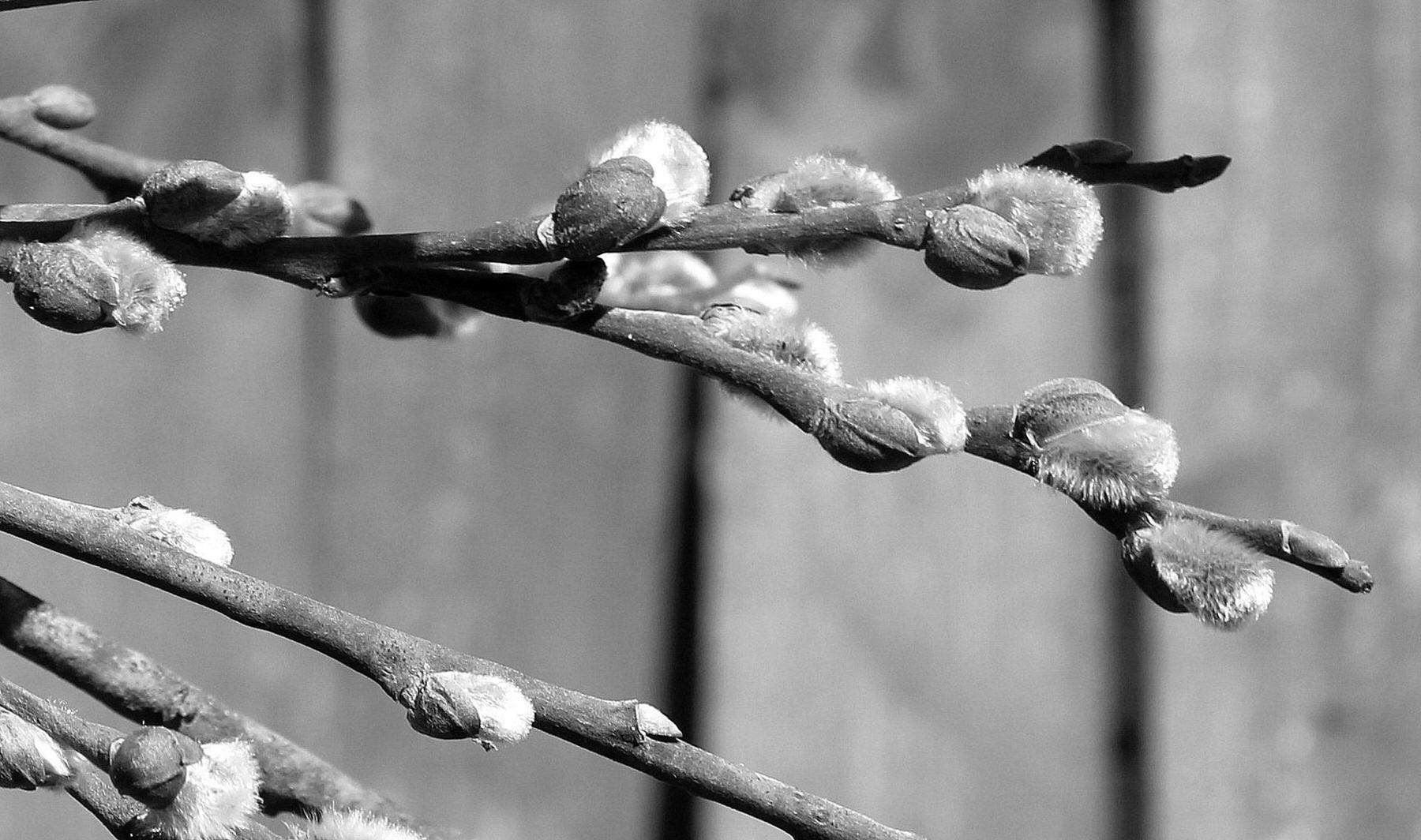 As the tree ages its bark, which is a lighter brown in a younger tree, becomes a darker brown and has many distinctive fissures that deepen with age. The twigs are a shiny yellow-brown and are slender in shape but these also make a distinctive crack sound when snapped. The buds grow tight into the twigs and are a similar yellow brown colour to the twigs.

The lesser-known, yet surprisingly common Hornbeam is said to be a tough and mighty tree. This deciduous broadleaf can live up to 300 years old and reach up to 30m at maturity. 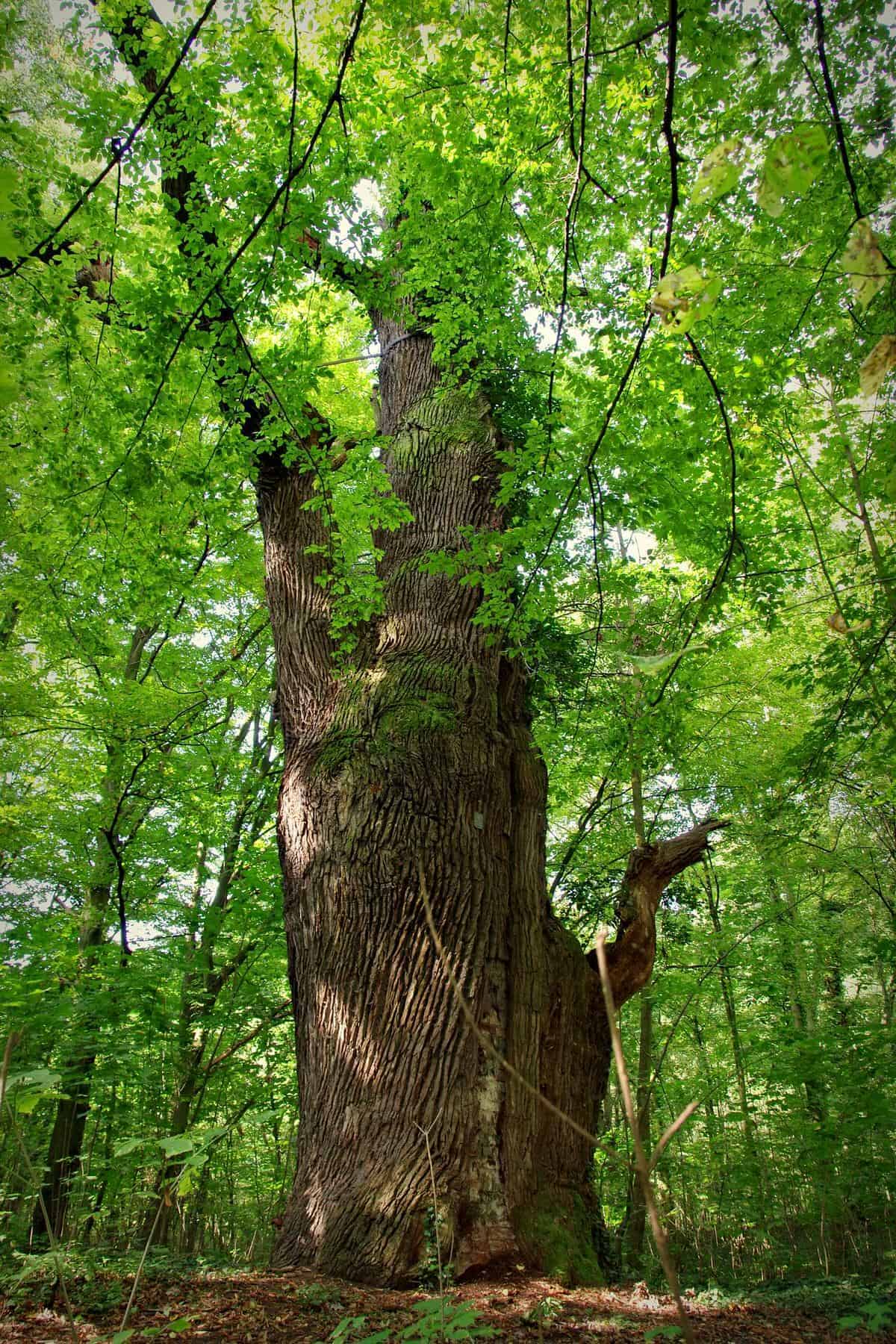 Similar to some Beech trees, the younger Hornbeam trees hold on to some dead leaf coverage in the winter months, it is thought that this helps to protect new growth from grazing herbivores as they find the dead leaves inedible. 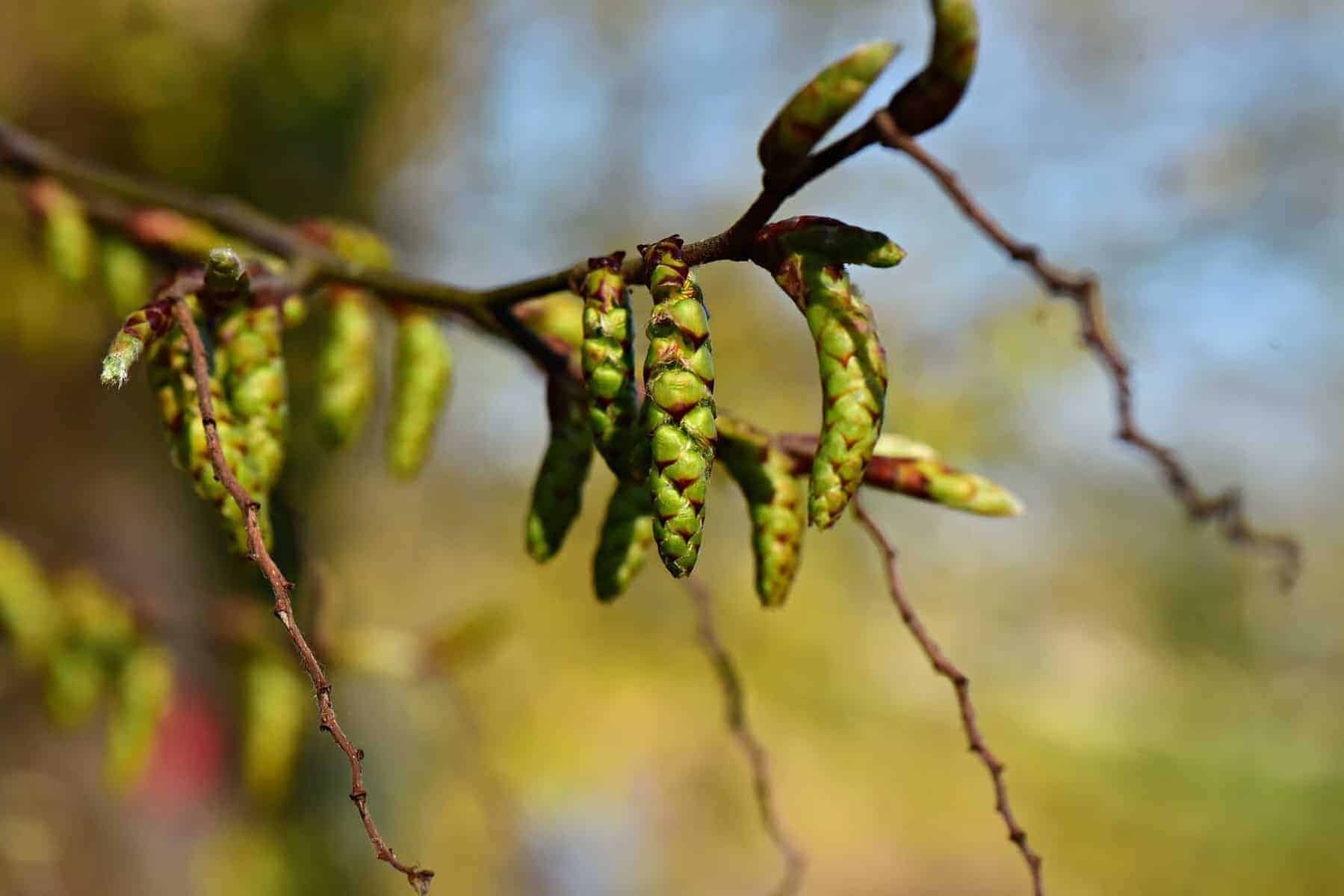 The Hornbeam’s bark is pale grey in colour with a slight silvery sheen, darkening slightly with age. Its vertical fissures become more distinctive as the tree ages. The twigs are a more brown-grey colour with a covering of fine hairs. Buds on the Hornbeam are very similar to that of a Beech but are slightly more slender and remain close to the stem.

The English Elm is usually found in hedgerows or amongst deciduous woodland. It is thought that this tree was introduced here by our ancestors from the Bronze Age.

In the woodland environment, this tree can reach 35m in height and can live up to 100 years. The Elm used to be one of the most common trees here in England, but back in the 1960’s the English Elm was hit by the Dutch Elm Disease which has led to a drastic decline in numbers, so you may just have to look a little harder these days but they are still out there.

As with other deciduous trees, during the winter months when the Elm has dropped its leaves you can identify the tree by taking a closer look at the bark and buds. Its bark is dark brown in colour with a hint of grey and very rough in texture with distinctive fissures that deepen with age. The Elm’s twigs are slender with fine hairs to help protect the new growth. These hairs give reddish-brown colour to the twigs and buds which grow above each leaf scar. 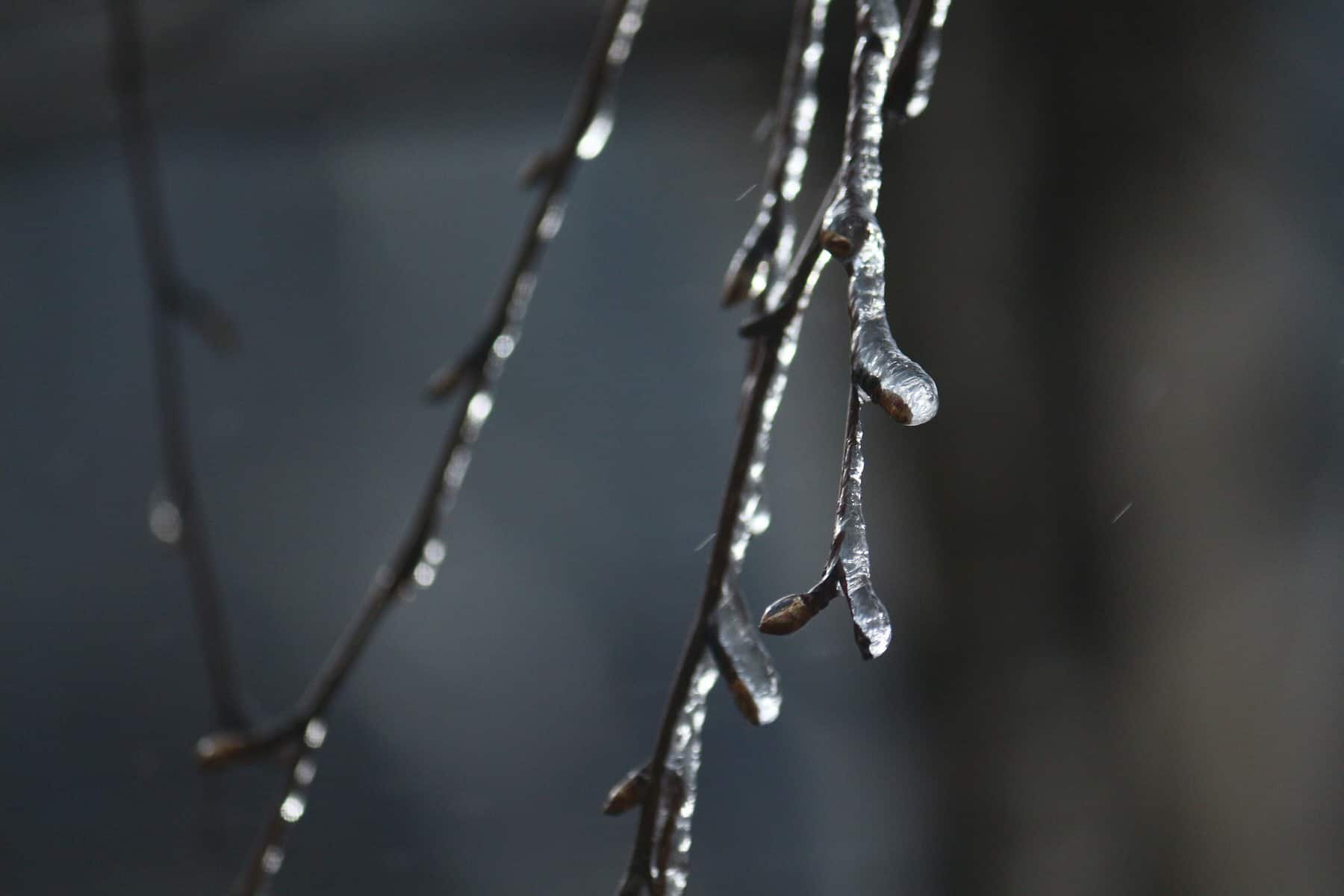 So this winter as you head out into the woods, or exploring across fields and parklands stop and take note of the trees that you find. Take a look and compare the differences in their bark and buds, note their differences and see which trees you can identify this winter.

Want to join the discussion?
Feel free to contribute!